Toyota Motor Corporation – A Japan-based automobile manufacturing company was founded by Kiichiro Toyoda in August in 1937 to fulfill the demand of all types of customers. The headquarters of the company is situated in Toyota City, Aichi in Japan. Toyota is the first company to manufacture and sell more than 10 million vehicles within one year and according to a survey in 2018, the company has a strength of 364,445 employees. 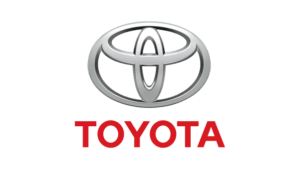 This logo was published in October 1989, on the 50th anniversary of the establishment of TOYOTA. The design focuses on the symmetrical composition of ellipses. An ellipse is a curve with two centers, indicating that the carmaker and the customer are intimate. And, the first letter T of “TOYOTA” is a stylized T formed by three ellipses, which is defined as “the soul union of consumer products”. The space behind it means that TOYOTA’s advanced technology is expanding and extending around the world, facing the future and flying continuously towards the universe.

The tagline is also known as a slogan, especially as used in advertising, or as a punchline of a joke. Toyota change their tagline from time to time, Here is a list of Toyota Taglines below.

Toyota one of the most leading car manufacturing brands in the world. They produce cars for all types of customers at a low price. They deliver cars in many color options like white, black, blue, silver, red, and many more. see below for more details:

Toyota has a small range of hatchback cars also. To check all the available colors options please click on the link below:

Toyota has a wide range of powerful and economical priced sedan cars. For more details please click on the link below:

Toyota has a good range of powerful and luxurious SUV’S & Crossovers cars. For all the details about the car please click on the link below:

Toyota also produces powerful and stylish supercars at very economical prices. Please click on the link below to know more about your favorite car:

Toyota starts manufacturing electric cars also. They trying to step forward to produce environmentally safe cars. Please click on the link below to know more about your favorite car:

A couple of trucks are also manufactured by the Toyota company. To find all the details about the trucks, please click on the link below:

If you are interested to get updates from Toyota you can follow them on social media platforms given below and if you want to contact them you go through their official website given below.